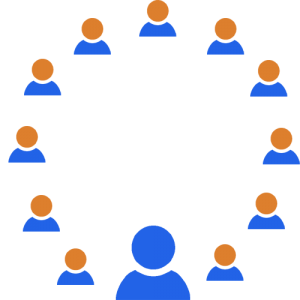 How to Learn Students’ Names Quickly–in 10 Minutes or Less

Building a great classroom environment begins with establishing respect and a sense of safety with your students, and the quickest way to begin earning their respect–to show that you care–is to learn their names. As teachers, we’ve all struggled with how to learn students’ names quickly. We’ve all struggled with attaching names to all of all the faces that come and go each year, semester, and/or quarter. “Name-Around” is a tried and true name-learning activity that effectively provides opportunity for the teacher to learn every student’s name, establish an environment of respect, as well as hold students accountable for knowing each other’s names.

I like to play this quick introduction video (~90 seconds) I created with DocStoryBuilder to highlight how confusing it gets (and how rude it is) when we don’t know each other’s names. Students get a laugh out of it every time.

Coming to a Circle

After showing the video, I’ll instruct students to come to a circle, standing. Since it’s the beginning of they year, this is also a great way to handle the structure and routine of how to safely move about the room…”No running,” “No shoving,” “Push in chairs,” “Quiet voices,” etc. Whatever you want to teach during this transition, go for it! Students should arrange themselves in a circle or oval, and be shoulder to shoulder. They don’t need to touch shoulders, but each student needs to be able to see everyone. Perhaps, if time allots, you can discuss here why circles are important. You could ask,

The goal is to guide them to the realization that circles reflect equality: When we stand in a line, there will always be a sense of “in front” or “behind.” Circles eliminate the sense of “social status” and the “I’m ahead of you” mindset.

Once students have successfully arranged themselves, start by addressing the student on your right. I say something along the lines of, “I’m Mr. Mason. What’s your name?” and once they introduce themselves, I say, “Well, [state student’s name], you are going to have it the second-hardest. I will have it the hardest.” Wait for a look of shock and despair, then reassure him or her that it will be OK. You’ll help him or her. He or she is not alone in this effort. Next, explain that, by the end, each student will have to repeat every student’s name in the circle.

Me: OK, guys. Here’s how it goes. I’ll start by stating my name. Then this student (student to my left) will state my name, then their name. What’s your name?

Me: OK, So James will say Mr.Mason, James. Then the next student will repeat this process. What’s your name [pointing to student left of James]?

Me: So, Sammy will say, “Mr. Mason, James, Sammy.” Then we go to the next student. What’s your name?

Me: OK, so now Alicia has to say, “Mr. Mason, James, Sammy, Alicia. Everyone goes, but I go last. I’ll have to say everyone’s name.

At this point, the vast majority of the students get it, and a mild groan may move through the crowd…I’m careful to point out that the most difficult names to remember are the names of the three or so people closest to yourself, because you will only hear them three times or less. Often, the most difficult name to remember is the person to your right, because you will have heard his/her name only once.

If A Student Gets Stuck

Make it clear that if a student gets stuck, that the other students are to wait patiently and are NOT to blurt out names. The student who is stuck on James’ name will ask James, “What’s your first letter?” James will answer, “J.” If the stuck student remembers James’ name, great. If not, then he/she asks James for the second letter, etc., until the light goes on. Sometimes, students need the whole name spelled out.

I’m always certain to say, “laughter will occur, and that’s great: Let’s have fun. However, we are always laughing with each other and not at each other.”

Emphasize the importance of letting other students struggle with names. When we come to the answer on our own, we learn. We don’t learn when we are simply “given” answers. It’s OK to struggle!

I always like to make sure that I reemphasize the introduction video: When people have names, they become real, human people–they’re not just “Hey, you!” I reiterate that names define us, make a large part of who we are. I’m sure to add that it’s quite rude to change someone’s name without their permission. I explain that when I introduce myself to new people in my adult circle, I always introduce myself as “David,” with two syllables. I am sure to iterate that whenever a person says, “Hey, nice to meet you, Dave,” that I raise my eyebrows and ask myself, “Really? Already? You’ve gotten so comfortable with me already that you feel free to cut my name in half?” Students respond favorably to this. I’m always sure to say that we need to respect each other’s individuality, and if “Christine” introduces herself as “Christine,” then we have no right to change her name to “Chris.” I’m sure to tell them that if they forget, it’s OK to ask: “Do you prefer ‘Chris’ or ‘Christine’?”

Another way to extend is to have students add gestures, favorite foods, etc. to their names, but this gets tough quickly. It works great for classes of ten or less, though.

Sometimes I’ll use Name-Around as a warm up on the second week, just to make sure students have learned each other’s names. I’ll typically have students group up in the circle the same way each time; this consistency is great for both myself and my students. However, to add another layer of challenge it’s OK to have students align themselves by birthday, alphabetically, etc. The extra communication required to accomplish these tasks also creates a fun environment for students to get to know each other.

As teachers, we are constantly under pressure to teach more with less time and resources. But we can never underestimate the power and value of taking time to learn the names of our students. As professionals, we want what’s best for our kids, and taking the time to create a safe, happy, effective learning environment is never wasted time. So, take 10 minutes or less to learn their names during your first week!

As a man, it’s always interesting to shake another man’s hand. I like to tell students that a lot is said about your personality in a handshake. I joke around and tell students that when another man I’m meeting tries to dominate me with a crushing handshake, I immediately (while looking them in the eye) go from firm to limp. It always gets a rather subtle, uncomfortable reaction from the other person. The body language of my “submission” immediately insinuates a statement of, “Oh, my! You’re so strong! Wow. What a handshake you have, there!” Of course, I’m being sarcastic, and students get my meaning. I’ll even drop my posture and knees a bit to emphasize my point. Finally, I’m sure to wrap up that a handshake should be conducted firmly, not powerfully, while looking the other person in the eye.

Most of us have fun “get to know” you activities. Did you find this article helpful? Please post a comment. Have a name activity that you have mastered and would like to share? Let us know!

SHARING IS CARING:
SHARE THIS ARTICLE ON SOCIAL MEDIA!

David Mason, M.Ed is the Founder of EnglishTutorsOnline and has a passion for teaching and learning in high-tech, online environments. He's been a classroom teacher since 2003, and has helped 8th grade to graduate level students from the U.S. increase their English skills. He also has extensive experience working with adult, international ESL students. Follow David on Google+ & Twitter.